Confession: I Joined a Ghost Gang.

Confession: I Joined a Ghost Gang. When I was 4 years old, I came to a revolutionary conclusion:
Ghosts are dumb.
My family lived in the epitome of 1974 trailer luxury in a little town called Cottage Grove. I’m pretty sure we even had brown shag carpeting, an industry standard at the time. I was pretty young, and my little brother had just been born. I was still reeling from my recent overexposure at the high school talent contest (see Addiction to Spotlights), and fielding paparazzi.
This trailer was a special one. Every night, I would lie in bed and wait for the ghosts to come. As soon as the light was off, my heart would start to stutter in my chest. The back of my neck would get all sweaty, and I would close my eyes. After all, if the ghosts think you’re asleep, they’re not going to eat you, right?
Then, I would hear it.
It started as a low moan outside the window, then howled against the side of the tin can that we lived in, trailing off into a dying whine. It was a chilling sound at any age, but at 4, I knew I was no match for whatever was making that noise.
I told my mom and dad about it during the day time. In the morning I would plead for her to let me sleep in another room, any room. I told her the ghosts lived outside my window at night, and I really needed to sleep with her and dad. She would pat my head and ask if I wanted another fried egg.

"Willow, when did you get so picky?!"

Once, I effectively mimicked the sound that I heard at night. My dad said, “Willow, that’s just the wind. There is no such thing as ghosts.” Obviously, my dad was brilliant. As the smartest man in the world, it was clear that he couldn’t be wrong. Still, doubts nagged in my mind. If it was the wind, why didn’t I hear it during the daytime? If there were no ghosts, what were all those white things who came to the door at halloween?
Now, there are a lot of kids in the world who deal with the imminent threat of a ghost attack in relatively the same way. Viable options include hiding under the covers, closing your eyes, praying, crying, or sleeping with your mom and dad. Any of these would have been considered “normal” responses.
After trying many of these and getting little return on my investment (I’m pretty sure that I only lasted one night in my parents room), I decided to pull out all the stops.
The next night, when the lights went out, I kept those little peepers peeled. I laid there like a corpse, waiting for the ghosts to show up. My doorless closet looked like it was staring at me. There was a weird plaid dress that my mother forced me to wear on special occasions, and it clumped together with all the other polyester in my closet to form a faceless, one-legged specter. 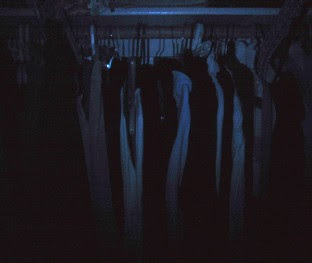 I was scared, there was no doubt about that.
So, in the dark, I talked to the ghosts.
“Ghosts? Hi, ghosts.”
No response. Typical.
“Um, ghosts? I guess you could eat me, if you wanted to…”
This was dangerous ground, and I knew it. I just hoped that the ghosts would listen to the rest of my case before making a decision.
“You could eat me, but I’m on your side. Yeah. I love eating people, too. In fact, it would be great if I was a ghost so I could be just like you. You’re my heroes.”
Silence. Obviously I had caught their attention. I couldn’t stop the fantastic relief of a good con from flowing through my body. I could tell that they were buying it.
“Yeah, maybe you could give me some hints sometime. I would love to know how to scare people really good, just like you. I love you guys.”
I still couldn’t hear them, but I was pretty sure they were talking amongst themselves. I could imagine them saying something like, “Hmm. I didn’t see that coming!” and “Well, we can’t eat her NOW, it’s against ghost code.” Even the figure in the closet seemed more approving. “You’re all right, kid,” the faceless monster would say. “You’re one of us now.”
They didn’t even have to say a word. I knew they had accepted me as one of their own. 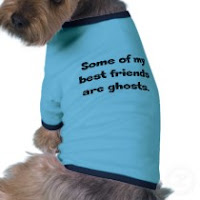 What was even better, I knew that I could fool them! I didn’t really love sucking blood and eating people. I wasn’t even really all that interested in being a ghost or monster, but it was clear that they didn’t know that. For the first time, I realized that I was smarter than somebody besides my 2-year-old brother.
I fell right to sleep.
I never had a problem with the ghosts after that. They still came to the window every night, and my first instinct was to run screaming into my parents room. But, after the initial wave of panic hit, I remembered that ghosts are stupid and would remind them that I was on their side. “Scare any little kids lately?” I would ask. “I bet the graveyard is really fun at night.” They would pass me by, remembering that I was off-limits.
Was this a brave thing to do? I don’t know about that. I was frickin’ 4 years old, remember?
Anyway, I realize now that this was a watershed moment. Although I have not ever thought about it consciously before, I realize that I have been trying to fool monsters all my life. Regardless of where I am at or who I am with, whenever I start feeling afraid, I do my best to reflect those around me. Whether I’m with business magnates, stoners, or academians, my subconscious message is always the same: I’m one of you guys. I’m on your side.
This has made having a backbone, umm…difficult.
I still get that same sense of satisfaction that I did when I was a kid. Yeah, tell me why I’m wrong and my politics will destroy the world. Explain why I need to do or be better. I promise I will nod my head and smile. Remember, I’m on your side.
But, there’s something that you don’t know. I might not be smiling and nodding because I’m on your side. Maybe I’m smiling because I know where my true loyalties lie and you don’t. I may just be enjoying the sweetness of knowing the truth while pretending to give you what you want.
Maybe I am a monster, after all.
So, I’m working on fighting the monster in myself. Maybe one day I will be able to stand up to people I disagree with, instead of just nodding my head while my internal monologue rakes them up and down for being lame. For now, I am still scared that they’ll eat me alive.