You. Yeah, I’m talking to you right now.

Don’t pretend that I didn’t just see that happen. Just because we are at a stop light and you are in a 1932 ford 3 window coupe car doesn’t mean that we are in separate worlds. I am not a figment of your imagination. I really just saw you do that. Your driving was terrible. I don’t know what made you think that that was acceptable. Seems to me like you need to go on a defensive driving course like the one at myimprov.com.

And yes I know that you probably aren’t reading this, and it probably won’t help. But you know what, I feel better for having said it. I’ve seen so many people make bad driving decisions, that I’m just sat there like how did you even pass your test? But then I remember that I probably did the same thing a week ago… it’s just that nobody saw me. Maybe I should be the one taking a defensive driving course to help make me a safer driver?

What is it about being in a car that makes most of us act like lunatics? Seriously. Kyle works at a very well-known insurance company and he hears about this stuff all the time. You know the one I’m talking about, with the spokeswoman with the googly eyes and big teeth.

Anyway, he hears this stuff constantly. He had to deal with a customer who had run into a guy. Unfortunately neither party had a dash cam (get yours from BlackBoxMyCar) so it became a battle of his word against the other driver.

Dick: “It wasn’t my fault. He ran into me first. Then he cut me off, like, 3 times. I was just teaching him a lesson.”

Kyle: “So. What you’re telling me is that you purposefully ran into another driver. That’s not something you would normally tell your insurance company…”

Dick: “Didn’t you hear me?! He ran into me first! He was a lunatic. He was trying to kill me!”

It’s not just road rage either. People do weird things in their cars. There is a sense of false security that we have when we are behind the wheel. Somehow, we feel that the glass and aluminum foil that our cars are made out of will shield us from the dangers and mockery of the world. I know I do.

Who is shocked? I always knew he was a woman.

If you are the one doing this, it’s not really that weird. For everyone else, it’s like watching a gorilla with a stick try to eat its own eyeball. Not only is this a very dangerous occupation (it’s like watching an accident BEFORE it happens), but it’s mesmerizing to everyone around you. Just like when little kids are awestruck by women putting on makeup in a bathroom mirror, people in cars around you can’t help but have their eyes glued to your every move. Who cares if they’re 5 minutes late to work? If they’re patient, they are sure to see a bloodbath. Probably around the time that red light turns green while you’re doing your eyeliner.

Eat tacos and hamburgers: go crazy. What you want to avoid is the “Grey Poupon”-inspired meals that should come with a complimentary coroner’s bag. Egg McMuffin=Safe. Scrambled eggs and bacon=Dead.

A good rule of thumb is to avoid foods that require utensils. If you are trying to eat a steak in your car while you’re driving, you already have bigger problems than I can help with. My only advice is to pack your overly-expensive suit with stacks of money as you leave your mansion each morning. When you do crash (probably due to a particularly large lobster claw that requires your cracking at a 4-way stop), perhaps it will soften the impact. Even if it doesn’t, you will make your EMT workers very grateful.

If your car has food all over the backseats and down in the foot wells, you will want to clean it up with a tool like a handheld vacuum cleaner – https://www.bissell.com/vacuums/handheld-vacuums.

When you are side-by-side the person, there are other considerations. First of all, if they’re good, I always want to find the station they’re listening to and see if I can jam along with them. There is always a hope in my heart that we will suddenly find ourselves head-banging to “Knights of Cydonia” together and I will mouthe “This song totally rocks!” to which they’ll respond, “Yeah! It’s totally wicked. Let’s be best friends forever!” And then we’ll go eat ice cream together. 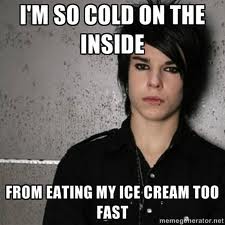 It’s okay to talk to yourself, and it’s okay to answer, too. What’s NOT okay is to tell yourself jokes and then to laugh moronically at them while merging onto the highway. I know that from personal experience.

I love to watch people talk to themselves. They try to pretend that they have bluetooth headsets on and have actual people on the other line, but I know the other half of the conversation is in their own mind. I have an easier time believing and trusting people who talk right out loud, so I can pick up the fragmented snatches of their conversation.

The mumblers are much scarier. The last time I heard a guy mumble to himself in a car, it was followed by a creepy one-sided smile and a motion for me to pull over. Give me a loud earpiece-touter any day. At least his imaginary friends don’t want me to get out of my car.

Maybe I’m just getting old, but I don’t think people really do this any more. Well, not to me, anyway. I remember a time when driving down the strip on a Saturday night was the equivalent of hanging a sign on your back window that said, “We’re teenage girls! Please honk at us and we’ll do something stupid!”

The new fad, of course, relies on the venus flytrap method of attracting mates. The male of the species “tricks” out his “sweet ride” with “rims” and “neon pictures of girls bending over.” He allures them with the soothing sounds of rhythmic thumping that threatens to shake out all the glass from every car within 20 feet of him. He leans over to the passenger side window, which he rolls down with a smoothe touch of a button. At this point he will indicate that he is single by licking his lips or uttering the ultimate pick-up phrase: “Hey, nice car.”

6. Watch TV or Read BooksThe girl in the 1996 Buick LeSaber smiles and tries to innocuously depress the old-school lock on her door with her elbow. At the same time, she turns back to the red light and wills it to change colors by the sheer force of her gaze. She avoids looking at him because she is sure that if she does, she will see a creepy stalker smile and a motion for her to pull over.

I can’t pretend that I am not an offender. While I have never watched a movie or TV show while I driving, I can definitely say that I am an avid drive-by reader. It’s a slippery slope really. There’s nothing wrong with listening to music while you drive, right? So then, why not listen to a book on tape. Except that they read so SLOWLY. Hence, it just makes more sense to read it yourself. Besides, I’ll only read at red lights. Except during the last 20 pages. Or at the end of a chapter. Or….

This is one of those things that I do that is really wrong, but I won’t actually stop doing. Don’t worry, I don’t do it when I’m taking Abigail anywhere. She shouldn’t have to pay the price for my obsession with stories. I am keenly aware of cops when I’m doing it, even more than when I’m doing one of the other ga-zillion bad driving habits that I usually engage in.

“I don’t want to die, Richard said, every word a superhuman effort. Jason you should not…” Is that just a white car or a cop car? “You can’t die, too, Jack pleaded, not you too…” La la la. (settling the book in my lap) This is a great book. See? It’s in my lap. I have my finger in this part because I’m going to read it at the next stop light. Also to protect my finger in the case of a nuclear explosion. Goodbye Mr. Policeman! I love following the law! (pause) “Richard’s upper body lurched against Jack’s arms…”

Would it look bad if I finished the chapter while I wait for the cops to arrive? Nah.

Jerry Seinfeld blew the roof off of this little gem. I see you do it. We all see you do it. You pick your nose and then drive away, thinking that you’ll never see us again ever. Gross. “It was a scratch, not a pick!” you whine. No one believes you.7. Pick Their Noses

I think it all caught up to me one day when I was waiting for a light to change colors. I was coming back from lunch, all bundled up in the tiny microcosm of my car. Why not? I ask myself. It’s my car, and it’s MY NOSE! Y’all suckas can’t tell me what to do! I’ll pick my nose in my car if I want!

That’s when my school’s principal and vice principal waved to me from the car across the intersection.

I guess that what I’m saying is that we believe our cars are little worlds where we can see out and no one else can see it. Even though it makes no sense, we feel that people outside of our cars belong in a bizarro universe where they appear on our life stages for a moment and then disappear into to Matrix as soon as they turn the corner out of our sight.I waved back, hoping that I had not done what I had been thinking of doing, or at least they had not seen it. It was not mentioned at any faculty function, but neither was the time I walked in on the only male English teacher at school because he had forgotten to lock the bathroom door. Some things just belong in the mini-world we create for them.

On the contrary. I think we are the bugs under the microscope. Our cars give the people around us the best possible voyeuristic opportunity. They get to watch us be weird, gross, creepy, and funny without all the long-term hassles of a spouse, child, or pet. We appear on their stage for a moment, give them something to laugh or swear at, and then move into the annals of their imagination.