I always wanted to be a hot cheerleader.  When I was 4, (this is an age we keep returning to, I know) I remember seeing all those cute little fluffy-headed cheerleaders with their fluffy-headed pom-poms and realizing that I really wanted to do that for a living.  As in, “What do you want to be when you grow up?”

Now, I have a lot of band-geek angst I need to deal with.  My father was a band director and had a vitriolic anger towards cheerleaders.  He even said it with italics around it, you could hear the sneer in his voice.  Cheerleaders.

To my dad, the cheerleaders were the stupid bimbos that messed up his half-time show by being too late, too early, too loud, or too quiet.  They always asked us to play some stupid song just when he was about to rip out a thrilling downbeat to “Peter Gunn,” or “Innagaddadahababsha, Baby.”  He would just shake his head and say, in italics, “Cheerleaders.”

But, I wanted to BE a hot cheerleader!  It was so unfair!  How did I get stuck being the band princess when all I really wanted to do was shake my pom-poms and bounce around in front of the whole school? 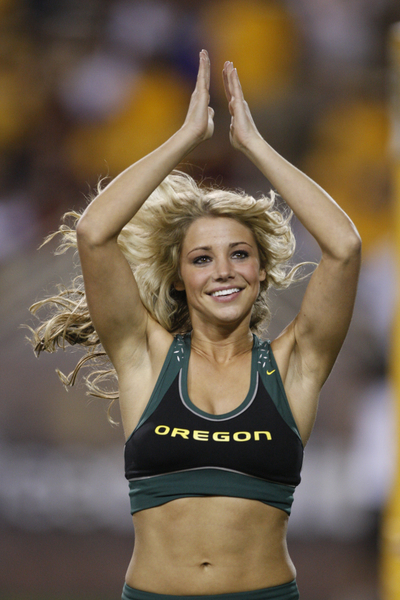 Just imagine: Cheerleader Willow.  OMG.  I would be AWESOME!  I figured that my voice was loud enough to get about half the school’s attention, and I had boobs big enough to get the other half to at least look once and a while.  I was cute and scrappy and had no sense of shame about anything.  I would have been la ultima cheerleader.  I could even touch my toes with my hands at the time.

When I told my parents, my little dream died on the vine, a shriveled little grape of an idea that my dad smashed under a trombone-wielding fist.  “You don’t want to be a cheerleader,” he said.  “Cheerleaders are stupid, and you’re not stupid.”

Oh, but how I wanted to be stupid.  So, I had to just live my dream as a hot cheerleader reincarnate.

Pep band and marching band were some of my favorite parts of high school.  I got to sit in the stands, scream like a monkey on fire, and jump all over the people in front of me.  I screamed the loudest, cheered the hardest, and wished that I could be down on the field, doing it for the whole school to see.

Fortunately, I am such an attention magnet, I didn’t really have to leave the stands for the high school to notice me.  Invariably, at every football game, some well-meaning teacher or parent would ask the students next to my friends and I if we were drunk.  I am pretty sure that at least one teacher complained to my dad, who just shrugged them off. 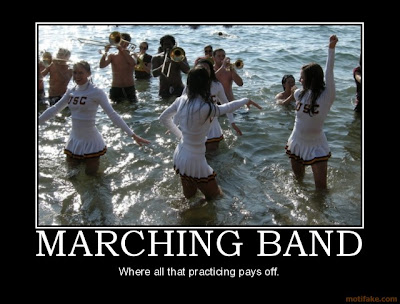 My band friends and I were the most dynamic cheering section of the school, and the cheerleaders knew it.  They would start some half-assed cheer about being aggressive or trying to teach the school how to spell the word “DEFENSE,” when I would turn to my friend Kate a scream loud enough for the linebackers at the 10-yard line to hear: “Let’s do TRUCKIN’!”

Then, we would start a-truckin’:

The cheerleaders would desperately try to finish their cheer, but realize that they could never outweigh the power of the band.  They would fall in line, just like everyone else in the stands.  Who can avoid cheering a football team who’s band members are grinning, bouncing lunatics?  Well, I don’t know them, anyway.  Besides, who wants to take a risk at opposing people who have heavy, metal objects in their hands?

I felt pretty good.  I didn’t become a hot cheerleader, but I was one anyway.  I was the band director’s daughter, and that gave me the whole power of the band behind me whenever I thought the cheerleaders were sucking at their jobs.  That actually happened a lot more than they would admit, but everyone else in school knew they were just blonde bobbleheads with big, cultured hair and baby voices. 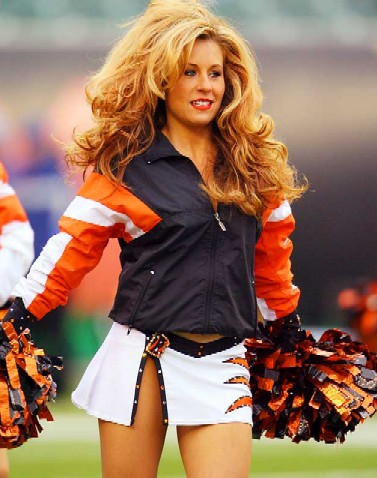 "I'm sorry, I can't hear you. The reception is really bad inside my hair."

That’s what I thought, until Reagan became a cheerleader.

No, I’m not talking about the president, although that would be a great story.  This was a girl from my high school.  She wasn’t a band-geek, she was a theater nerd.  She was pretty, with squinty eyes and a blockish face. I know that sounds unattractive.  I may be biased.

Still, I know that she was good-looking because everyone told me so.  Plus, she was dating the guy who I was pretty sure I was in love with.  He was a trumpet guy who played at coffee shops on the weekends and Reagan would go with her little black-beret-wearing friends and do golf claps when he was done.  Sometimes she sang with them.  She had a great voice.

She tried out for the cheerleading squad…and GOT IN!!

She did cheers at football games…and people LISTENED!!

She had a big, brassy voice and bounced all over the field…and I WAS SO JEALOUS!!

Oh…my…gosh.  There Reagan is, shaking her pom-poms on Friday nights, singing “My Funny Valentine” on Saturdays.  She even beat me out for the lead in “Anything Goes,” but was too cool to ever come to one cast party.  She stole my life!!

What made me so mad was that I KNEW her, and I KNEW she wasn’t stupid.  My dad had been wrong.  Cheerleaders aren’t dumb.  Well, some cheerleaders ARE dumb.  What my dad failed to teach me was that hot cheerleaders are like everyone else.  It’s a job, and someone is going to do it.  If it’s not you, it will be somebody else.

I would’ve been a great cheerleader.  I know that now.  And, I could’ve been a hot cheerleader, too.  By the time I was out of the house and excited to try some new stuff, it was too late.  The competition to be a college cheerleader was too stiff for an inexperience yokel like me.  Plus, I was pretty good at cheering from the stands. 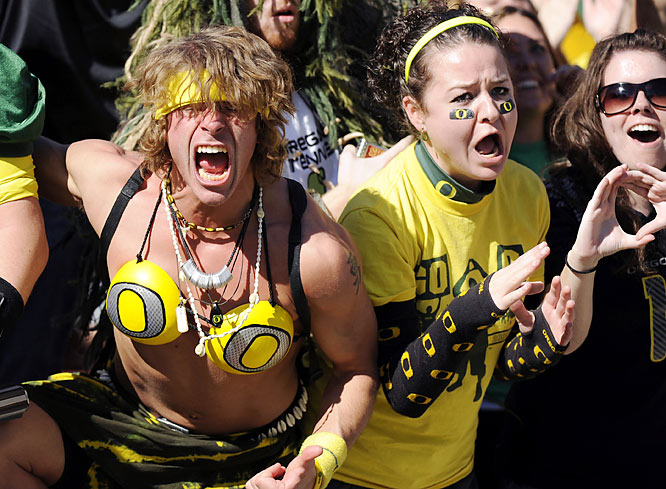 That's me on the left. I told you I was stacked.

A few years later, I got some crazy news.  My sister had become a cheerleader.  I remember standing there, jaw dropped, while my Dad told me the news.  He had a huge smile on his face.

“Dad,” I sputtered, “You told me cheerleaders were stupid!  You said you would never have a cheerleader in our house!  You said…”

My dad smiled, and cut me off by putting his heavy hand on my shoulder.

“Oh, Willow.  She wanted to do it, so she did it.  If you had really wanted to be a cheerleader, you would have.”

I guess he’s right.  If I had really wanted to, I would have.  How much did I want it?  Not more than I wanted my dad to think I was cool.  Not more than giving up being racous, crazy, and inappropriate in the stands.  Not more than yelling swear words at the ref every time he threw a flag on our right tackle. If I had been a hot cheerleader, I might have been able to shake my booty in front of a lot more people, but I wouldn’t have been able to do it the way I wanted to.  And taking that road of wild abandon, lost voices, and unfortunate band incidents?  That has made all the difference.